London guide > Getting around London 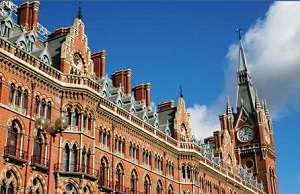 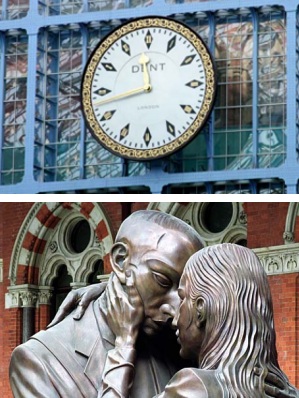 St Pancras station is regarded as one of London's favourite landmarks and has a rich and colourful history.

It is the key destination for the Eurostar and high-speed rail in the UK.

The railway station remains one of the greatest Victorian buildings in London, with impressive Victorian Gothic architecture.

The station was designed by William Barlow in 1863 with construction commencing in 1866. The famous Barlow train shed arch spans 240 feet and is over 100 feet high at its apex. It was a spectacular feat of Victorian engineering and held the world record for the largest enclosed space for many years.

One of the most recognisable features of St Pancras station today, the red brick Grade 1 listed Gothic front facade was created as part of a competition in 1865 and became the Midland Great Hotel designed by Sir Gilbert Scott and built between 1868 to 1876.

During WWII the station was hit during the Blitz on London. Despite the devastation, engineers soon had the platforms working again.

In 1996, London & Continental Railways (LCR) was selected by the Government to build and operate High Speed 1 (formerly called the Channel Tunnel Rail Link) and to own and operate the UK arm of the Eurostar international train service.

St Pancras underwent an £800 million architectural restoration and extension which has brought this unique London landmark back to its original grandeur. The glass extension has been designed to house the extra long Eurostar trains in their new home. There is also 82,000 sq ft of retail space and the station features Europe's longest champagne bar. The newly renovated station was opened by the Queen and the Duke of Edinburgh in November 2007.

The renovation of the terminus completed the £5.8bn UK rail link to the Channel tunnel which has shaved 20 minutes off the 68-mile journey to Folkestone, bringing journey times to Paris down to 2 hours 15 minutes, the same time as London to Manchester.

St Pancras International is the new home of some specially commissioned pieces of public art. There will also be temporary art displays at the station held throughout the year.

The Meeting Place is a 9m high bronze of a couple locked in an intimate pose by the world renowned sculptor Paul Day. The couple stand underneath the famous St Pancras clock at the apex of the Barlow shed.

The famous St Pancras clock has been reconstructed by the original makers Dent, and now hangs high at the apex of the Barlow arch once more.