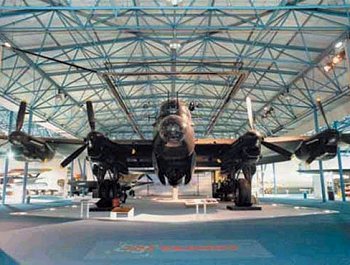 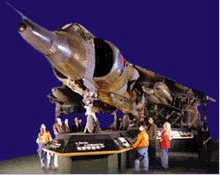 The Royal Air Force Museum, Britain's National Museum of Aviation, celebrates the story of aviation from before the Wright Brothers to the RAF of the 21st Century with one of the world's finest collections of legendary aircraft and associated exhibits.

The Museum stands on 15 acres of the historic former Hendon Aerodrome at RAF Hendon, one of the oldest aviation centres in the country. It was home to the famous Hendon Air Displays and RAF Pageants of the 1920's and 1930's and the airfield was used as a fighter station during the Battle of Britain and then a transport station for the remainder of World War II.

Today, the aerodrome houses a total collection of well over two hundred aircraft including the legendary Spitfire and Lancaster Bomber, together with fascinating exhibits and a world class collection of aviation art.

Take a nostalgic walk through the Battle of Britain and the Blitz; fly with the RAF Eurofighter; thrill with the Red Arrows in the flight simulator; take the controls of a Jet Provost trainer or climb right on board the enormous Sunderland Flying Boat.

Opening Hours
Open daily from 10am until 6pm.

Getting There
The Museum has a large free car and coach park and is also easily accessible by the Thameslink rail service at Mill Hill Broadway.